Are you looking for a detailed explanation of the the available pump commands?
Are you interested in the specific syntax of a pump command?

They are explained in detail in your pump manual.

How does the pump communicate with a computer.

A quick explanation of the process – this should be useful to those of you writing your own pump software.

Assuming you have a working pump network….

The computer sends the characters of a command – generated by a human typing a command into software or a piece of software automating pump operations. SyringePumpPro does both of these things – accepts pump commands from an operator and it queries the pump automatically to update it’s pump status information.

Format of Command to Pump

A master-slave protocol is used, whereby the pump will only transmit in response to a received command.

When the pump receives the

it will  be stripped of all space and control characters, and all text will be converted to upper case. This simplifies communications with the pump when commands are being manually typed in from a generic terminal emulator.

This travel down the cable to the pump.

Format of Response from Pump

The pump replies with a ‘safe mode’ formatted response which is design for electrically noisy environments. A CRC value of the response contents is sent so that the receiver can confirm that the pumps actual response was received.

You can simply accept the response data without checking the CRC value, and the response is human readable text. SyringePumpPro checks all responses and alerts the operator if data corruption is detected. 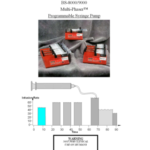 Back to Pump Programming | Back to FAQs

About the Author: SyringePumpPro

As the author of SyringePumpPro products I have been involved with laboratory pumps for about 10 years now. My career spans electronics, avionics, programming, teaching, research and development laboratory experience, and even television.